Helium: Helium is an element having the atomic number 2 and is represented by the symbol He.

Hydrogen: Hydrogen is a chemical element having the atomic number 1 and is represented by the symbol H.

Helium: The atomic number of helium is 2.

Hydrogen: The atomic number of hydrogen is 1.

Helium: Helium has only 0 oxidation state.

Helium: Helium has two major isotopes as 3He and 4He.

Hydrogen: The melting point of hydrogen is -259oC.

At room temperature and pressure, hydrogen exist as a diatomic gaseous molecule. It is a colorless and odorless gas. The melting point of hydrogen is about -259oC. The boiling point comes around -252oC. Hydrogen has three oxidation states. They are -1, 0 and +1. When hydrogen is attached to a metal atom, it has -1 oxidation state.

There are three major isotopes of hydrogen: Protium, Deuterium, and tritium. Protium is the most abundant isotope and has an abundance of 99%. Therefore, when we generally talk about hydrogen, we are talking about Protium. Deuterium is also a stable isotope but is less abundant. It has a neutron in its nucleus whereas Protium does not. Tritium is a radioactive isotope. Furthermore, there are many other isotopes that are not stable, and are highly radioactive.

Helium is an element that has the atomic number 2 and is a gaseous substance. The chemical symbol for helium is He. The electron configuration of helium is 1s2. The atomic symbol of helium is 42He. An atom of helium is composed of 2 protons and 2 neutrons in the nucleus along with 2 electrons in its 1s orbital. Therefore, the atomic mass of helium is 4.002602 amu. At room temperature and pressure, helium is a colorless and odorless gas. Helium is considered as the second most abundant element in the universe. It exists as a monoatomic gas. 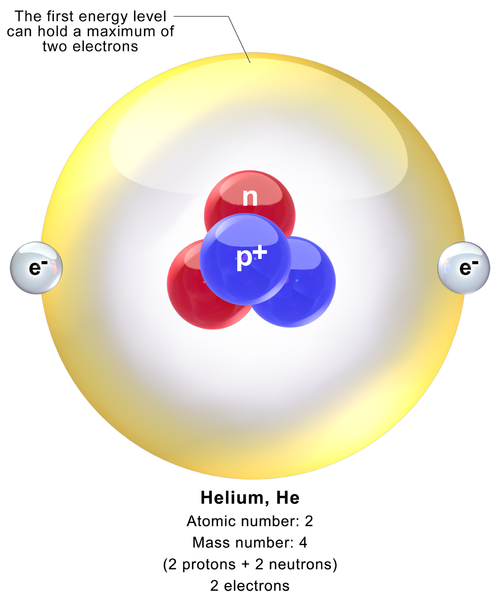 The melting point of helium is about -272.2oC, which is a very low value. The boiling point of helium is given as -268oC. This makes it a gas for a wider range of temperatures. In the periodic table of elements, helium is categorized as an s block element but is placed in the right side corner of the table. This is because helium is an inert gas that will not undergo chemical reactions. It is also a non-metal.

Since helium is a noble gas, it only shows zero oxidation state. There are two known isotopes of helium. They are 3He isotope and 4He isotope. 4He is the most abundant form among them and its abundance is given as 99%. Both of these isotopes are stable and no radioactive decay can be observed. However, there are some other isotopes as well. They are unstable and radioactive.

Helium is widely used in balloons. In addition, helium is used to provide a controlled atmosphere for many synthesis reactions (such as synthesis of silicon crystals) due to its high inertness. It is also used as an inert shield for arc welding. Helium can be converted to its liquid form, which is known as liquid helium and is used as an important cryogenic material.

Hydrogen and Helium are the first two elements that are found in the periodic table of elements. Therefore, they are the smallest and lightest atoms on earth. Both of them are gaseous substances. Due to the characteristic features of hydrogen and helium, there are many applications of these gases in industry. Due to the very light weight of these gases, they are used to fill air balloons. The main difference between helium and hydrogen is that helium atom exists as a monoatomic gas in the atmosphere whereas hydrogen exists as a diatomic gas in the atmosphere.

Hydrogen has only one proton and most commonly has no neutrons.

Helium has two protons and needs to have at least two neutrons to provide stability and hold the positively charged protons together.
( With only one proton in Hydrogen there is no positive to positive repulsion and so no need of neutrons.)

Hydrogen has only 1 electron in the 1 s energy shell 1s1
This means that Hydrogen is not stable as a single atom. Hydrogen must join with another Hydrogen H2 or another atom to fill the 1s orbital.

Helium has 2 electrons in the 1 s energy shell 1s2
This means the Helium is stable as a single atom and does not join with another Helium or other atoms.